Following last week’s agreement to delay the UK’s withdrawal from the EU until the end of October, UK politicians took some time off for Easter this week. With Brexit kicked back once again, whilst this has reduced the urgency to reach an agreement on the withdrawal, if one cannot be reached by the latter part of next month, the UK will likely participate in European parliament elections. Parties therefore started their campaign preparations this week which saw Nigel Farage launch his new “Brexit Party”, with a large pro-Brexit vote currently expected, it could create difficulty for the government in the coming weeks. 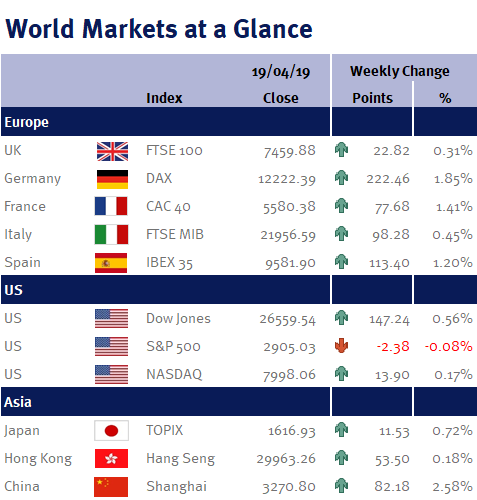 There was positive news for the UK labour force this week, as the number of people in work hit a record high, whilst unemployment remained at 3.9%, its lowest level since 1975. Data also showed wage growth remained strong at 3.5%, close to an 11 year high. UK CPI inflation came in at 1.9% which was lower than expected but echoed subdued figures released globally last week. This combination of wages rising faster than inflation provides a boost for consumers, whose spending drives the British economy. This spending was evident in UK retail sales, released on Thursday, increasing for a third consecutive month in March. The figures beat estimates (that had predicted a decline), demonstrating the resilience of consumers, despite uncertainty around Brexit.

Chinese GDP data surprised on the upside this week as the economy was reported to have grown at 6.4% over the past 12 months versus estimates of 6.3%. Alongside GDP, other Chinese data released was also impressive, as retail sales and industrial production both beat estimates, signalling the Chinese economy is benefiting from a waning of trade tensions with the US, and demonstrating government stimulus measures are beginning to take hold.

US retail sales also beat expectations this week, rebounding from a negative figure last month to show a gain. In summary, economic data was broadly positive, the lack of inflation helps reduce pressure on central banks to tighten monetary policy, whilst other data points signal reasonable growth in economies globally.

Away from data, it is worth mentioning The Mueller Report. On Thursday, US Attorney General Bill Barr published a redacted version of the report into the Russian interference in the 2016 US Presidential Election. What has been published is largely inconclusive, with both sides spinning the story to suit their own agenda. Special Counsel Robert Mueller said he lacked confidence to clear Donald Trump of obstruction of justice but suggested Congress could take action on at least 10 instances where the president sought to interfere with the probe. This is counteracted by comments made by Bill Barr that he disagreed with Mueller’s findings. Much like Brexit, expect this story to continue for some time.

Next week, some of the important data releases include US GDP and core PCE (the Fed’s preferred measure of inflation), UK public finance data and in Japan we have monetary policy, industrial production and retail sales.