The week has been remarkably subtle given it feels plenty has happened… yet not a lot has ‘actually’ happened! 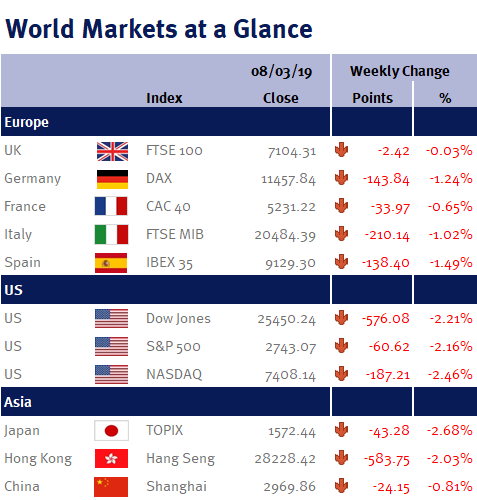 The media has been rampant this week ahead of next Tuesday’s House of Commons vote on Theresa May’s Brexit plan. Whilst negotiations in Brussels between the UK and EU have been drawn out this week, many factors are yet to be settled on, and with the UK rejecting the EU’s latest offer late today, it is appearing likely that the deal presented next Tuesday will be rejected by the Commons. And, with all parties concerned (UK and EU) appearing willing to add an extension to the end of March Brexit deadline, this seems the most likely outcome, adding further short term relief for both markets and indeed sterling. This is backed by comments from the Bank of England Governor, Mark Carney, earlier in the week when he suggested that a ‘no-deal Brexit’ was half as likely as was stated by the bank last November.

Elsewhere we saw US trade representatives on Monday reiterate Donald Trump’s intention to terminate the GSP (General System of Preference) agreement that allows free trade concessions with the US for Turkey and India. Whilst initially Indian markets pulled back, the Indian government downplayed the move announcing the agreement provided a meagre £145 million of benefits to export revenue. Following this data, market relief was clear seeing Indian markets dramatically rise, striving to pare losses on the year. This is a huge buoy for the market ahead of Indian elections in April/May. One can also not avoid mentioning recent border skirmishes with Pakistan, but with the frictions being a long standing issue, with a ‘downed’ Indian pilot being returned, and with both parties willing to talk peacefully, India’s President Modi’s stance has been a further positive for political stability ahead of the elections.

On Tuesday, China’s annual people’s Congress opened in Beijing where key long term plans were discussed and implemented. However, the opening statement of the conference saw Chinese Premier Li Keqiang lower the growth target for the year to 6-6.5%… and whilst Li cited a “more complicated environment” going forward, it must be remembered that Chinese middle class continues to grow, idea generation is growing rapidly, valuations are low on a relative basis… and for a country with a population of over 1.3 billion, a growth rate of over 6% is immense; particularly as the decline in GDP is part of the longer term plan to be more consumption-led. In addition, whilst trade data released this week has been weak, this was to be expected given trade negotiations with the US have been pushed back until 29th March.

On Thursday the European Central Bank (ECB) met to set monetary policy and as expected, everything remained broadly static with the exception of the introduction of TLTRO III (Targeted Long Term Refinancing Operations) programme of bank loans intended to offer cheap money to the banks in order to boost the economy in 2019. Despite the ECB head, Mario Draghi, citing growth concerns driven by trade uncertainties (with the US) as the rationale; he was clear that the ECB believe these measures, along with the accommodative nature of the central bank, will increase the market’s resilience throughout 2019. This followed growth (GDP) for the region coming in at 1.1%, and some strong PPI (producer prices) numbers that were released on Monday suggested European deflation worries are a thing of the past!

There was a small spatter of data throughout the week seeing Japan’s GDP beating expectations for the 4th quarter of 2018, and Chinese reserves being maintained at over $3 trillion. However, the most prevalent data was the US Jobs Report that was released on Friday that saw unemployment significantly decrease to 3.8%, whilst participation remained at its previous levels. Coupled with this strong data set, whilst hiring levels were weaker than previous, wage gains were strong.

As an aside, and for those interested in art, Sotheby’s auctioned their first ‘A.I.’ artwork on Wednesday. The piece was an algorithm driven portrait that generates new faces based on thousands of historic portraits from previous centuries. The piece just about scraped its lower estimate of £32,000, with the seller stating disappointment with the price. After ‘googling’ the piece, I would suggest that beauty is in the eye of the beholder and that £32,000 seems more than fair… but then, I am no art expert!