All attention this week was on the Fed minutes after Jay Powell, the Fed Chairman said last month that the Fed would “be patient” on the timing of future interest rate “adjustments”. This dovish statement was a big U-turn from December when he said that “some further gradual increases” were needed. 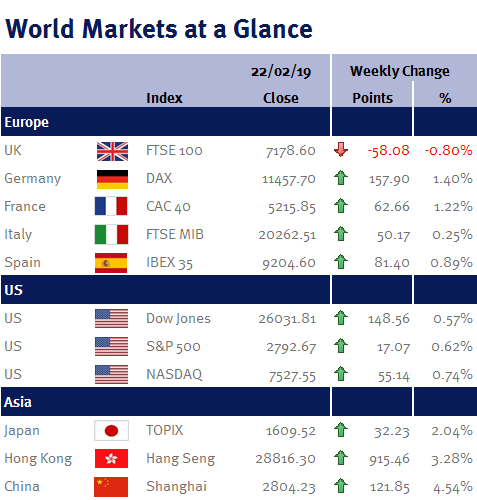 Consequently, we were hoping the minutes from the monetary policy meeting would help explain what has changed and indicate the level of consensus among committee members.

While in general the minutes were dovish, we were disappointed they weren’t more dovish.

The Fed policymakers noted that the US economy is performing well but also that uncertainties had increased (predominately China and Europe) and that financial conditions had tightened.

However, we did learn that the Fed wants to end the shrinking of its balance sheet by the end of the year (a process called quantitative tightening – the opposite of QE, where the Fed sells bonds rather than buying them) and that confirmation is positive, as we have recently been worried that their QT program is starting to hurt the economy.

Elsewhere, minutes of the ECB’s monetary policy meeting indicated that policymakers are finally accepting that the eurozone economy is slowing down. As such, policymakers will use their March meeting to decide if the economic weakness is sufficient enough to restart its TLTRO program (targeted longer-term refinancing operations).

In the UK, the direction of the pound continues to be determined by Brexit. This week, the pound strengthened as Theresa May plans to meet EU leader Donald Tusk at the EU-Arab Summit in an attempt to secure an acceptable Brexit deal. But what is good for the pound is bad for the FTSE-100, as it lowers returns for exporters and the value of overseas earnings – hence why the FTSE-100 ended the week 0.80% lower.

This coming week we have the Fed’s preferred inflation gauge, the PCE and US Q4 GDP, along with the eurozone’s CPI and unemployment data.